This weekend the people of the Britannia neighbourhood have an opportunity to share ideas and visions of what our community hub should look like in the future. Saturday March 6th from 1:00-4:00 pm (in Gym D) everyone is welcome to participate in "Designing Our Future" and this is a perfect time to think big about the possibilities for all things green and zero waste in scope.

Though there has been no recent update found here on the blog that doesn't mean that great things have not been happening around here! Now I offer a quick and humble recap of what I've seen through my green lens since the last posting: 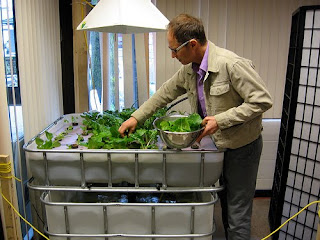 Our rockstar food security coordinator Ian Marcus, along with our superstar programmer Lorrie Wager, organized a Stone Soup Film Festival showcasing some amazing films on food issues in the fall (don't miss the upcoming Stone Soup Fest this May!), and a Water Festival that spread out through February with programs for children at our local schools, and events for folks in the community.

Water has been a big focus with Ian's aquaponics project in the Info Centre and he's working with 7 Britannia High school students to research the benefits of growing plant foods with fish waste, is taking food security to a new level. Amazing to watch the food growing right here in the office!!

And a last note on the water front: the whole green team thing got going 1 1/2 years ago with a little water cooler debate that led to a vote by staff on whether we should switch to a water filtration system instead...and with thanks to our leader Cynthia Low we will soon have new water for staff around the complex from WA2!, and we can finally stop our dependence on bottles! yeepa!

One more thing that Cynthia has pulled together on the green front for Britannia is a recycle depot, Beyond the Blue Box, which is found in our parking lot on the 3rd Saturday of every month. Wonderful way for all of the community to get rid of the recyclable materials the city doesn't pick up. Visit www.pacificmobiledepots.com for details on pricing, and grab all that styrofoam, batteries, plastics and other stuff you haven't figured out how to rid of, and come check it out for yourself on March 20th.

In trying to reduce our waste of paper, one of the best ideas came from Lori Moretto and Jessica Yee: to email receipts to people who register by phone! - so simple. so effective -
After the Micro Footie registration I'd guess that at least a few packages of paper and a box of envelopes (at least) were saved by emailing the majority of receipts to parents rather than mailing them. We need more ideas like this, which can be implemented right away and require little to no effort by all to make it happen. Some habits are hard to break, but little steps like this one can make a difference once they become the norm.

A couple of interesting articles on the zero waste issue that I wanted to share for anyone looking for some debate material (am I the only one who looks for things like that?). Recently Bill Gates gave a speech on Innovating to Zero Waste and on the WorldChanging site they had two views on this that I found worth reflecting on.
Bill Gates: the Most Important Climate Speech of the Year which argues that when Bill says Zero Waste is possible everyone believes it (as opposed to all the crazy environmentalists who have been advocating towards this goal for decades), and the Counter Argument: Joe Romm on Gates which says while its great that Bill has finally relaized the benefits of zero waste, he should not be seen as the only visionary on the subject.

Now, to finish back on the "Designing Our Future" path, I found an enjoyable summary of the best ideas to come out of the Designing Indaba 2010 conference which held a bounty of inspiring possibilities for Britannia to work into our faboo complex of the future.

While the green team has been on hiatus due to busy lives aplenty, the overall green theme seems to have become the standard here at Britannia and that is good news indeed. Keep those visions coming everyone!! We may just achieve that Zero Waste by 2020 goal yet. ;)

Beyond the Blue Box

Don't just throw it away - recycle the stuff that the City doesn't take! more...